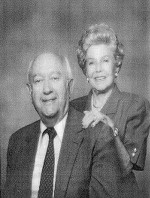 State Bar of Arizona
member since 1944

John Nicholas (Nick) Udall and his wife, Sybil, joined in this interview.  Nick Udall was born and raised in Arizona. His family is considered one of Arizona’s pioneer families. Nick attended Brigham Young University and University of Arizona before enrolling in George Washington University Law School, graduating in 1943. He then returned to Arizona to practice law.  He was the Mayor of Phoenix from 1948 to 1952. He served as a judge the Maricopa County Superior Court from 1952 to 1956. After leaving the bench, he returned to private practice at Jennings, Strouss, Salmon & Trask in Phoenix. He retired in 1992.

Interviewed by James McNulty in 1991.