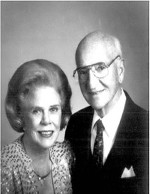 University of Arizona,
class of 1930

The child of a pioneer Arizona family, Ora Webster DeConcini was born near Thatcher, in Graham County. She attended Mormon schools, and Woodbury Business College in Los Angeles, and taught business courses at Gila Academy while still a student herself.  Upon completlon of a degree in Accounting and Business from the Unlversity of Arizona in 1930, she taught school in Tucson.

In 1932 Ora Webster met and married Evo DeConcini, who was just completing a degree in law.  In the years after their marriage, Evo's career and land development projects prospered. The family, which eventually included four children (Dino, Dennis, David and Danielle), moved From Tucson to Phoenix, and back again, as Evo served as Pima County Superior Court judge, State Attorney General, and Justice of the Arizona Supreme Court.  During this time,  Ora was active in political  and civic organizations, including the Tucson Fine Arts Board, the Symphony Women's Association, the Newman Foundation, and St. Joseph’s  Hospital. She served as a precinct committeewoman for the Democratic Party for thirty years, and was on the Democratic National Committee for eight years.  In 1978, she was named Arizona’s Mother of the Year.