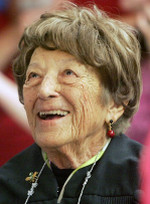 University of Arizona Law,
class of 1963

State Bar of Arizona
member since 1963

(b. 1921 - d. 2015) Lillian S. Fisher was born in 1919 in New York. She received her degree from Brooklyn College majoring both in Physicology and Education Cycle. She worked for Bell Labs and in the export business, married, and had three children before deciding to become a lawyer. She moved to Arizona with her husband and children after her husband finished his military service.  They first lived in Benson and then moved to Tucson. With her children in school, Lillian decided to enroll in law school.