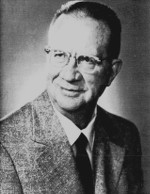 University of Arizona Law,
class of 1947

State Bar of Arizona
member since 1937

Clarence Duncan was born in Globe, Arizona in 1915. He attended the University of Arizona to obtain an LLB degree. His last year of law school was at George Washington. He took the bar exam early and finished his degree after coming back from the war in 1946. He was admitted to the State Bar of Arizona in 1937, but his degree was listed in 1947.  He worked as staff for Senator Hayden, was a county attorney, was in private practice, and a partner with Jennings & Strouss.

Interviewed by George Read Carlock in 1991.