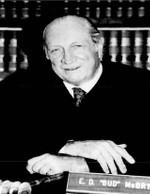 Estes DuMont (Bud) McBryde was born December 9, 1919, in Dallas, Texas. His family moved to Tucson in 1933. While a student at Tucson High School, McBryde played baseball and basketball, and was captain of the baseball team. McBryde enrolled at the University of Arizona with a baseball scholarship and received a Bachelor of Science degree in Business in 1942. Upon graduation he received a commission in the Marine Corps and spent the next three years in the South Pacific. In 1945, after his service with the Marine Corps, McBryde played minor league baseball in the Southern Association. In 1946 McBryde enrolled in the University of Arizona Law School and received his J.D. degree in 1949.

Upon graduating, McBryde opened a law office in Casa Grande, where he could both practice law and play baseball for the Casa Grande Cotton Kings. In 1952 McBryde was appointed Deputy County Attorney and in 1960 he became Pinal County Attorney. He was appointed Pinal County Superior Court Judge in 1966. He served as presiding judge from 1978 until 1989.

Interviewed by James McNulty in 1989.