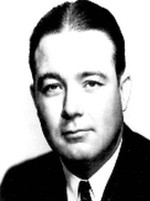 State Bar of Arizona
member since 1936

Wesley Polley was born in Bisbee, Arizona, in 1912. His father, J.E. 'Bert '' Polley, was a rancher and law enforcement officer. Polley spent his early years on ranches in Southern Arizona and in Bisbee, where he attended the public schools. He finished at Bisbee High School in 1928. After school he worked in the mines for Phelps Dodge. When the mines closed in 1930, he got a job as an accountant, first for Dorris Hyman and then for Union Oil Company in Los Angeles. With his decision to study for the legal profession, Polley moved his family back to Florence, Arizona, where they lived with his parents. He studied law and worked part time as a prison guard in the state penitentiary. He was encouraged and helped in his studies by friends of his father: Judge William C. Truman; Arthur T. LaPrade; and, Charles Reid. After passing the bar exam in 1936, Polley worked on the election campaign of Attorney General Joe Conway.

Polley was drafted into the army in 1943 and served until 1945. He then returned to private law practice in Bisbee. He also served as Cochise County Attorney from 1950 through 1957.

Interviewed by Robert F. Palmquist in 1987.