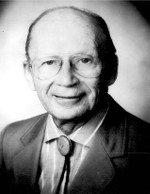 State Bar of Arizona
member since 1970

Willard Hiram Pedrick was born in Ottumwa, Iowa in 1914. He received his B.A. from Parsons College in 1936 and his JD from Northwestern University in 1939, being accepted to the Iowa Bar that same year. Following a one year clerkship with Judge Frederick Moore Vinson at the U.S. Court of Appeals for the District of Columbia Circuit, he taught for one year at the University of Cincinnati and then taught at the University of Texas at Austin from 1941 to 1942. He returned to Washington D.C. to work in the tax section of the Justice Department and subsequently in the Office of Economic Stabilization. In 1943 he joined  the U.S. Marines Corps and served as an Intelligence Officer until 1945, earning the rank of First Lieutenant.

Mr. Pedrick taught at Northwestern University Law School in Chicago for twenty years beginning in 1946. Arizona State University sought him in 1966 to organize their newly created Law School and he stayed on as Founding Dean until 1976 and then as professor of law until his retirement in 1983. He has written a number of noted books and articles in his specialties,tort and tax law, and in Australian law, a subject of personal interest for him.

Interviewed by Alan Mathenson in 1990.