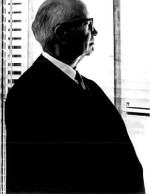 University of Arizona Law,
class of 1934

State Bar of Arizona
member since 1934

Gordon Farley was born in 1908 in Michigan and came to Patagonia, Arizona, with his family in 1918. After graduation from Patagonia High School in 1928, he attended the University of Arizona, receiving his law degree in 1934. He began his law practice in Nogales and married Virginia Sayre in the fall of 1934. Farley expanded his activities into the political realm, serving as Nogales city attorney, and later as a state representative. Resuming his law practice in Nogales briefly, he then ran for the judgeship of the Santa Cruz Superior Court. He was elected in 1938 and served in that capacity for the next forty years.

Interviewed by James McNulty in 1987.